Hello internets!
It's been a while hasn't it? I've been so busy running and sniffing and eating lamb and sleeping and exploring and sleeping and eating chicken and peeing and eating 'roo' and gardening and eating cow that I've been letting Opaka keep you updated on all our adventures.
'Cept for today!
Today started off cold. Very cold. It was even colder because the guy with the hot breath that lives in the roof doesn't seem to want to help us get warm at the moment so my Humans found another way to make sure we didn't turn into ice cubes: A sun in a box! 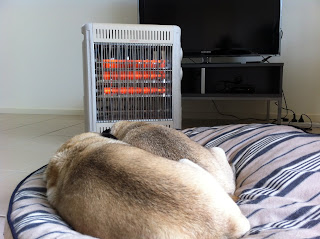 (We love the sun in a box.)
After a while of super-warm-zzz's our Humans came along with our going out gear and off we went in Echo for a drive. I love Echo - he has special little baskets for us to sit in so we can look out at things as they go whizzing by.
We arrived at a huge place *PACKED* full of pugs! Big pugs, small pugs, black pugs, white pugs, fat pugs, skinny pugs - pugs pugs pugs pugs! 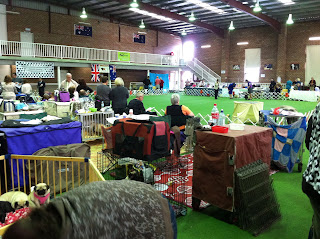 We were in for another surprise, Miss Joanna and Rikki were also there with a bunch of pugs from Pug Rescue & Adoption Victoria. (The wonderful people who saved us from the place of The Yard.) 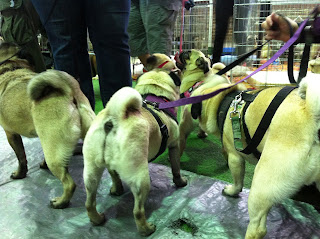 I nearly wagged my curly tail right off! Even my bro Toby was there!
I met a tonne of other pugs who are also looking for a Home, and one little lady called Cookie (who kinda looks a bit like Opaka did before she got better) with not very much fur thanks to those demodex bitey things and not enough love where she was before. 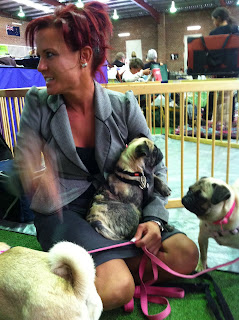 Cookie having a snuggle with Miss Joanna.
Opaka and I got some awesome cuddles from Rikki and I got to sniff butts with Toby and the rest of the gang. 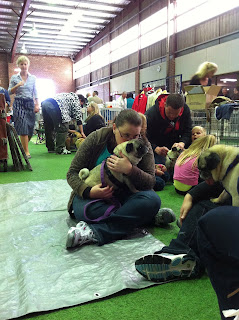 It turns out that this place was actually an event to show pugs off that people think are extra special because they stand funny (like Opaka does when the grass is wet so she pees standing up) and are a bit fat.
My Guy said that I don't need to stand funny to be special and that he thinks Opaka and I are extra special perfect without having to have a choker chain put around our necks and made to walk in a circle. He also said that he likes us being able to run around and have lots of energy because we're healthy.
We did get to walk around the circle at the end of the day with our Humans and all the rest of our rescue crowd to help raise awareness for all the puggies still waiting to find a Home, and we got lots of claps going around by the people in suits with numbers tied to their arms.
The Loud Lady talked about some of the places these other pugs had been, places like a 'puppy farm' where they'd eaten rocks just to try and stop their tummy feeling so empty, or had never seen the sunlight with chains welded around their necks with 400 other pugs before being found.
I'm glad they all had couches to go home to like we do now.
We even got a shiny circle of metal once we'd walked around (our Humans had to wear it for us, it wasn't pug-sized) and stood in a big row with all of our other puggy brothers and sisters while the suity humans kept clapping for us. 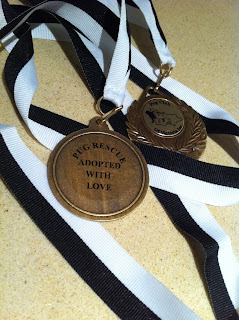 We're very lucky now to be able to have a sun in a box and a couch to enjoy it from, but today really made me remember there are still so many of us out there with no couch to call their own, even when it's so very cold outside.
My Guy said we were all 'Best In Show' and looking down that line I think he is absolutely right. I gave him a big cuddle and lots of licks all the way home.
We recycled pugs really have a lot of love to give!
Posted by Kai at 1:54 AM 10 comments

What's wrong with this picture? 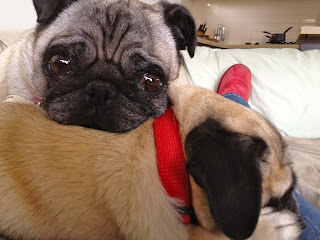 Something is wrong in this picture...can you tell what it is?

That's right, somehow Miss Mel though it was okay for Kai to sit higher on her lap than me.  Well this is what I had to say about that..... 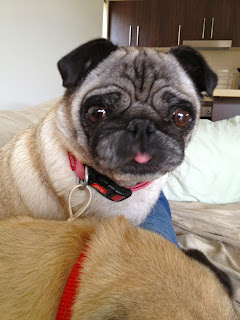 I've now explained to her that perching on her shoulder like a parrot is a far better compromise and in fact is more in recognition of my position in the house.

So my humans have been very slack about blogging for a long time.  A really long time.  Miss Mel says she is very sorry about that but she got very busy and then was so behind on all the blogs she didn't have time to catch up.  That made her feel guilty about posting anything and so nothing happened.  My response to this was a repeat of the photo above.

Let's not even bring up The Mr's excuses!

The good news is I've convinced to her to get going again today, but she said to say sorry to all those whose blog she reads and that she'll be passing through very soon.  I'd like to say thanks to those who stopped by in the meantime and especially to Tweedles for being concerned.

We're back!  More adventures will follow soon.
Posted by Opaka at 10:38 PM 6 comments

To help her feel better 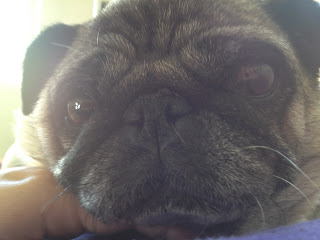 The last couple of days Miss Mel hasn't been feeling well in her tummy.  So I've been helping her feel better by laying on it.  I was very concerned about her and I'm sure my laying here has helped her.  Plus she was laying on my couch, so I had to lay on her.  Today she is better and I'm sure it's all my special cuddles that did the trick.
Posted by Opaka at 9:01 PM 10 comments 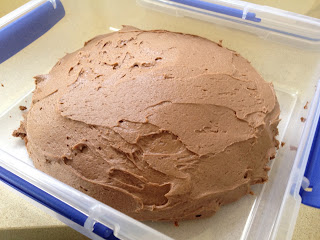 Today Miss Mel made this.  It's her chocolate cake with cream cheese icing. 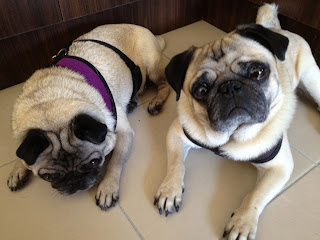 But even though we looked at her like this and stayed in the kitchen the whole time, making sure we were near or under her feet the whole time to get her attention, she didn't share any with us.

The cake was to celebrate the ending of watching some tv show both our humans enjoyed.  They've been watching it for about as long as we've been with them.  All we really know about it is that we like to bark a lot at this guy:

I'm hoping the next show they watch has dogs in it, preferably pugs of course.  Though they make us bark too!  As long as there aren't any crying babies, that's the most important thing, they get me all upset.
Posted by Opaka at 10:27 PM 7 comments

Today when we got up Miss Mel was singing songs like this.
That's when we realised it must be the special day to celebrate Australia and being Australian.  So the humans went out and came back with a very special treat for us. 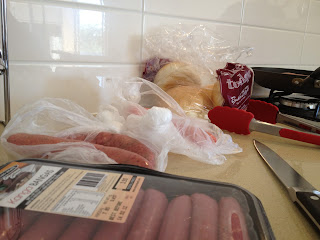 Kangaroo sausages!  Apparently they are gourmet ones and kangaroo is this super lean meat, so the humans were happy to give them to us. 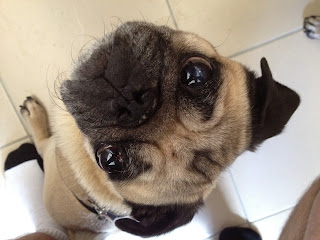 We were desperate to have them and started using the orbs to make sure the humans didn't eat them for themselves. 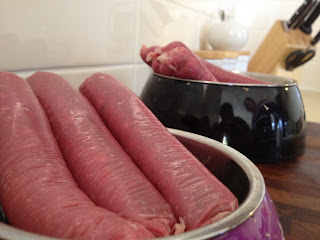 I'm not happy about the fact that Kai got more than me, he always gets more food than me. 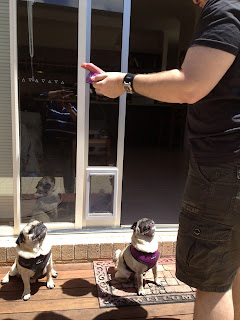 Whatevers with the sitting, just give us those sausages! 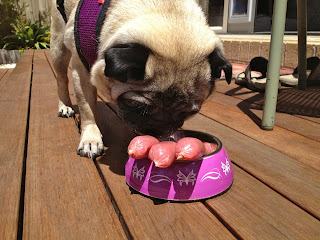 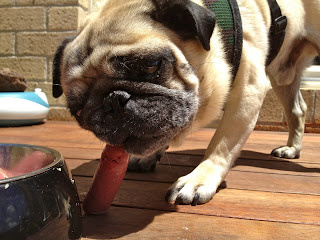 Yes, I did try and get Kai's last sausage, but it's only fair, he got more than me! 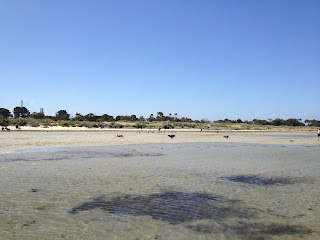 After lunch the humans took us to a beach for dogs.  Dogs are allowed off their leash there but our humans aren't ready to let us go like that.  Apparently after the BBQ they want to be sure we'll listen when they call.  Plus there were some big dogs there and they weren't sure how'd we would react to them. 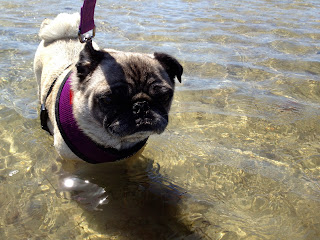 Today we tackled the water and I wasn't impressed.  I'm not having a bath, why am I getting wet? 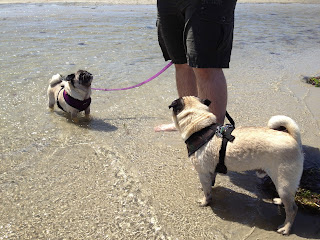 Then the humans got out the treats and after that I couldn't care less about the water.  Water shomter, give me some of that liver! 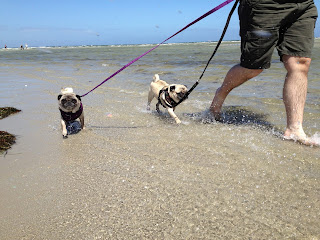 We ran around in the water and I got nice and cool.  I hope we'll be going there again.  One of the humans there, that are not ours, said that lots of rescue dogs come there, so at least I'll know we'll have something in common with the others.

I had a great day, I hope your Australia day is just as fun!

(Note from Mel: No Ugg boots were hurt in the making of this blog post.)

(Second note from Mel: I'm nominating this as our new national anthem...Make sure you get to the rocking part!)
Posted by Opaka at 12:15 AM 7 comments 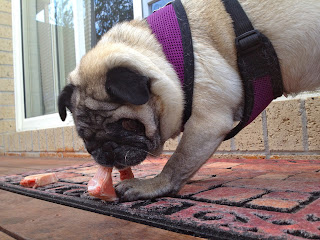 Today the humans brought something new home for us to try for dinner.  It's called Osso Bucco, Kai and I went a little crazy over it.  The meat was so delicious but the best bit was the marrow.  Oh the marrow!  It was so lovely and squishy to lick from the bone.  So very tasty.  Then there was a lovely bone to chew on.  It was a three course meal! 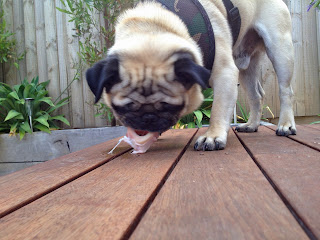 The only problem now is that I want to sit on the couch with our humans, but there are still those wonderful bones outside that I want to chew on.  I keep trying to bring them inside to the couch and the humans throw them back out.  I don't understand why I can't have the two things I want at the same time.

Kai and I have been together for a long time.  He licks my ears, snuggles next to me on the cushion and pre-chews my bully-sticks for me.  While sometimes we do fight, really I'm very glad he's with me everyday.  When he's not there I know something isn't right and he feels the same about me.

I know the humans weren't sure what to call our relationship when we came to live with them.  I'm pretty sure they know now that we are just together, we're a unit and that's what really matters.  I suppose that makes him my husband.  I love that all four of us together are a family. 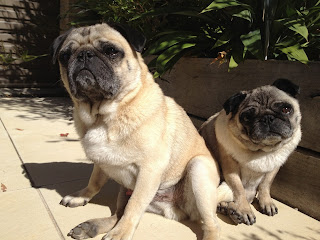 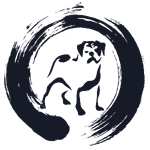